DESIGN BRIEFING
The product to be developed is a professional MOP BUCKET for washing floors in medium to large areas. As usual, the starting point is the initial client BRIEFING which specifies dimensions, functional requirements, market positioning, materials, etc. In this case the client requests the development of a bucket with a NEW DESIGN but which retains typical features and can be used with MOPS it is already producing.

AESTHETIC STUDY
The first activity is the concept design, which concerns the preparation of the SKETCHES and the AESTHETIC DRAFTS that will serve to dictate the guidelines that will characterize the article. We proceed with the analysis of all the article’s functional and structural needs, which the aesthetics will have to fit.

3D DESIGN AND MODELLING
Considering in detail all the rules of use and safety that represent mechanical constraints, the article begins to be modelled following the previously defined dimensions and aesthetics. In this phase the article is defined geometrically, identifying inconsistencies between the proposed style and the mechanical requirements. For this reason, it is necessary to discuss with the working group any compromises and/or differences with respect to the pictorial representation in the sketches. 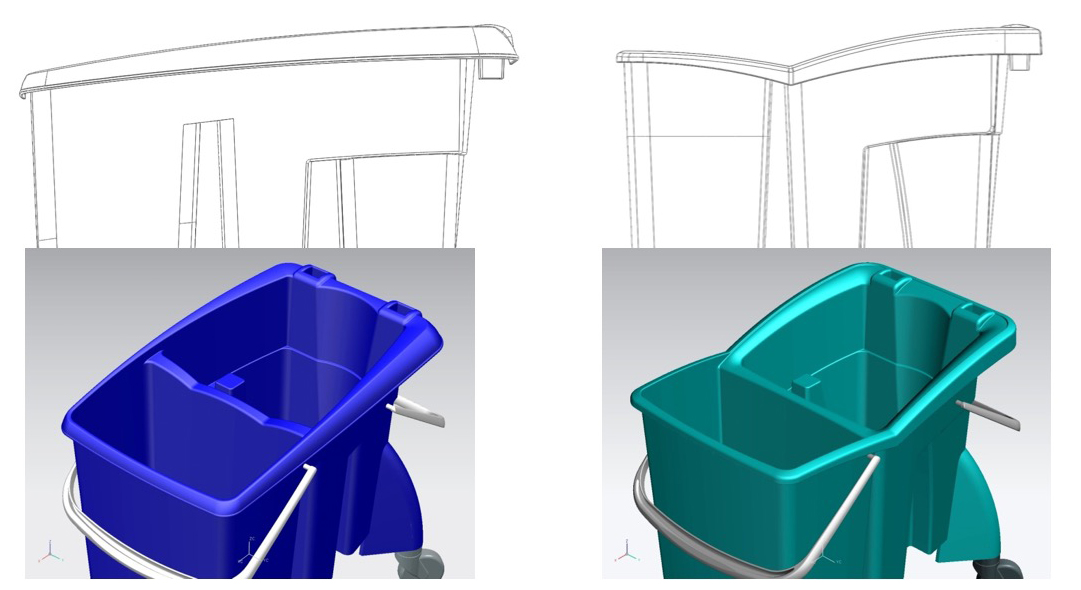 ADAPTATION OF EXISTING FIXED PARTS
The new BUCKET must be compatible with three different existing MOP models. SCANNING of the MOPS is performed. These are displayed and positioned on the insertion area in the form of STL files. The scanning operation takes place using our optical scanning machine, which enables detection of models of any shape, hardness or size. 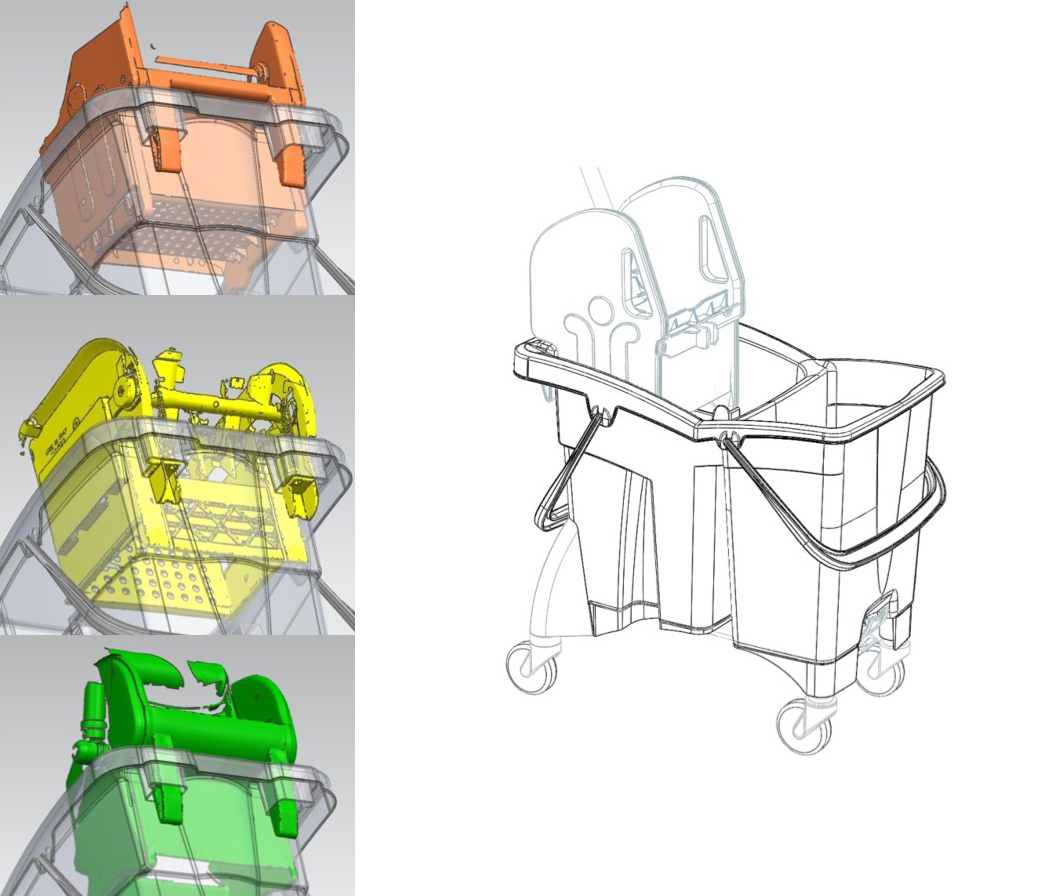 ASSEMBLY OF THE ARTICLE
In this phase all the newly modelled components are positioned and ASSEMBLED with the existing components, with the aim of verifying: interference, clearance, and measurement errors, as well as evaluating the overall aesthetic result. The changes suggested by the working group are then considered and made to the mathematical model before the next prototype test. 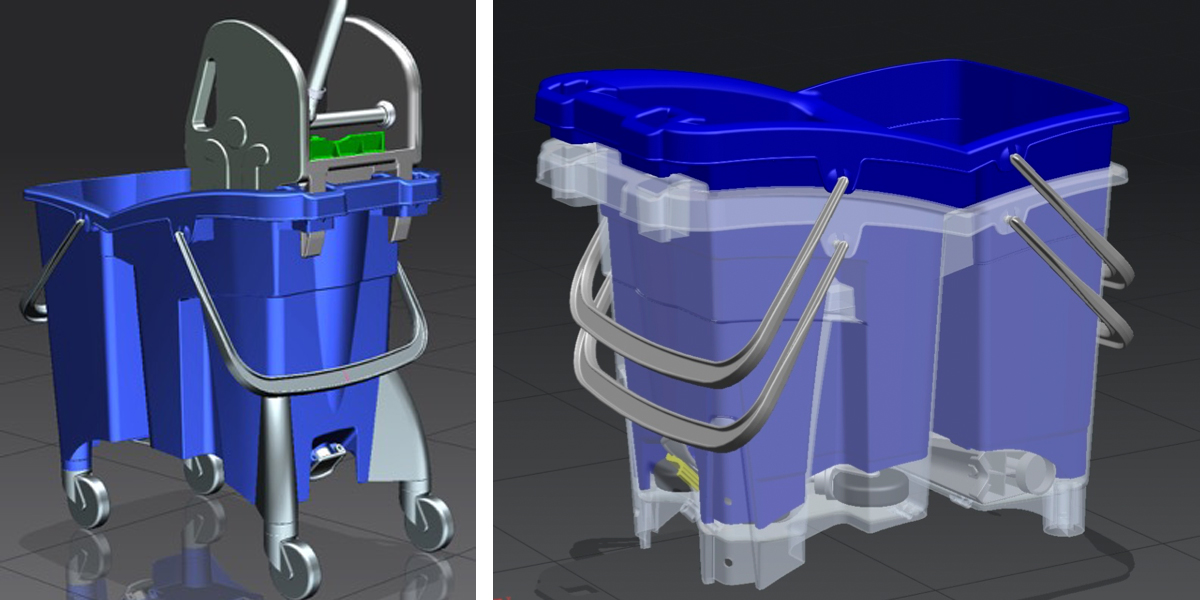 ARTICLE PROTOTYPE PHASE
In the prototype phase the design is subject to a real, PHYSICAL CHECK.  The prototypes for the newly designed components are built using the technique of stratifying molten nylon powder.  The mop bucket’s aesthetics, functionality and assembly are verified.  This is the most important verification phase because the working group plans any changes and adjustments necessary for the product’s functional optimization and the improvement of the industrial parameters and the mould construction specifications. 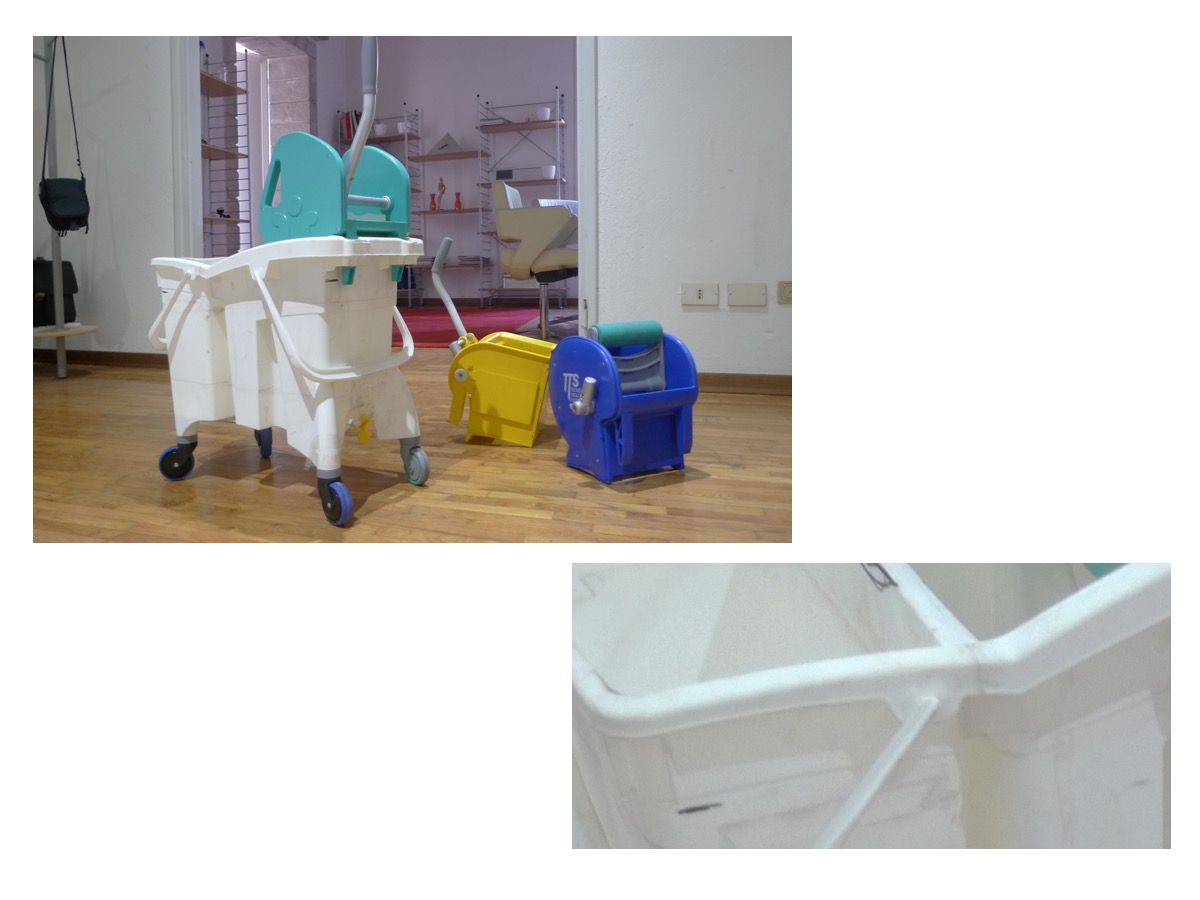 PRODUCTION OF TECHNICAL DATA SHEETS
When all modifications and/or optimizations agreed with the customer, mould-maker, and production manager have been made to the design, the article’s development can be considered complete.  TECHNICAL DATA SHEETS are produced for use by for all production departments:
– mould construction sheets (mould layouts, surface finishes, extraction points, etc.)
– production sheets (colours, article pre-assembly)
– assembly instructions for the end customer. 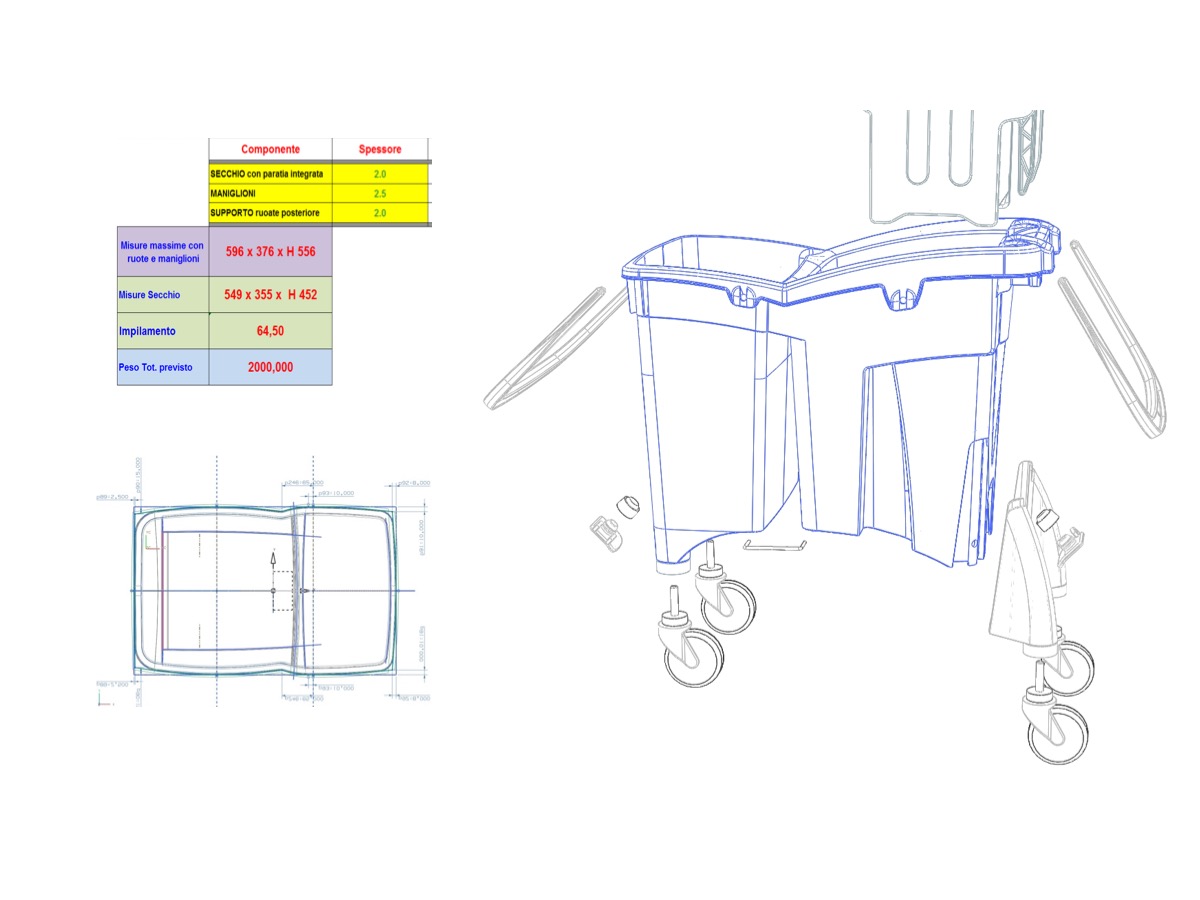 TRIAL
After the FIRST MOULD TEST, the product is assembled for verification. Sinking of the material occurs near the mop die, highlighting bleaching of the plastic.  It was decided to intervene via targeted variable thickness increases. The problem was thus solved. 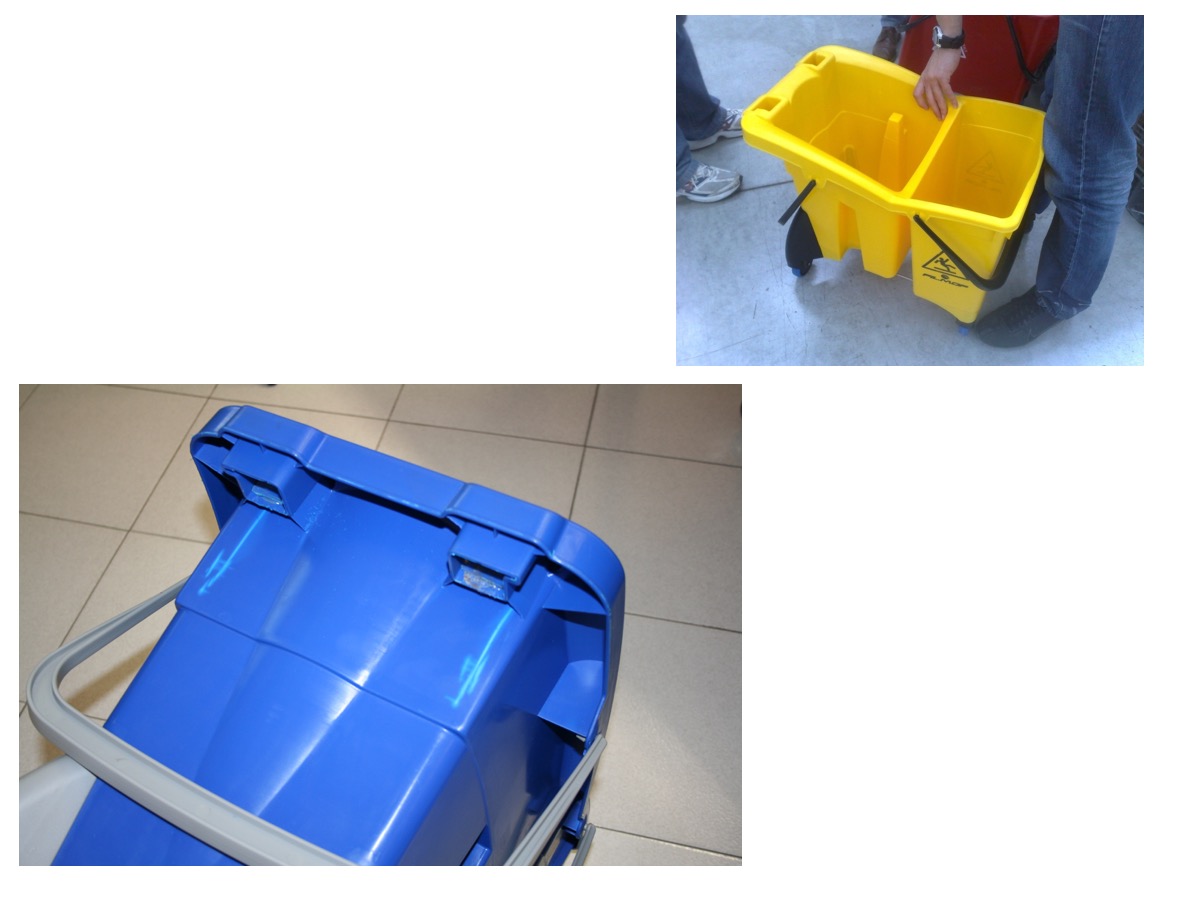 FUNCTIONALITY HIGHLIGHTING
After the FIRST MOULD TEST, the product is assembled for verification. Sinking of the material occurs near the mop die, highlighting bleaching of the plastic.  It was decided to intervene via targeted variable thickness increases. The problem was thus solved.

FINAL PRODUCT
The tested final product, complete with graphic look, is ready for sale. It can be used for washing medium-sized surfaces such as hospital rooms, hotels, and schools. 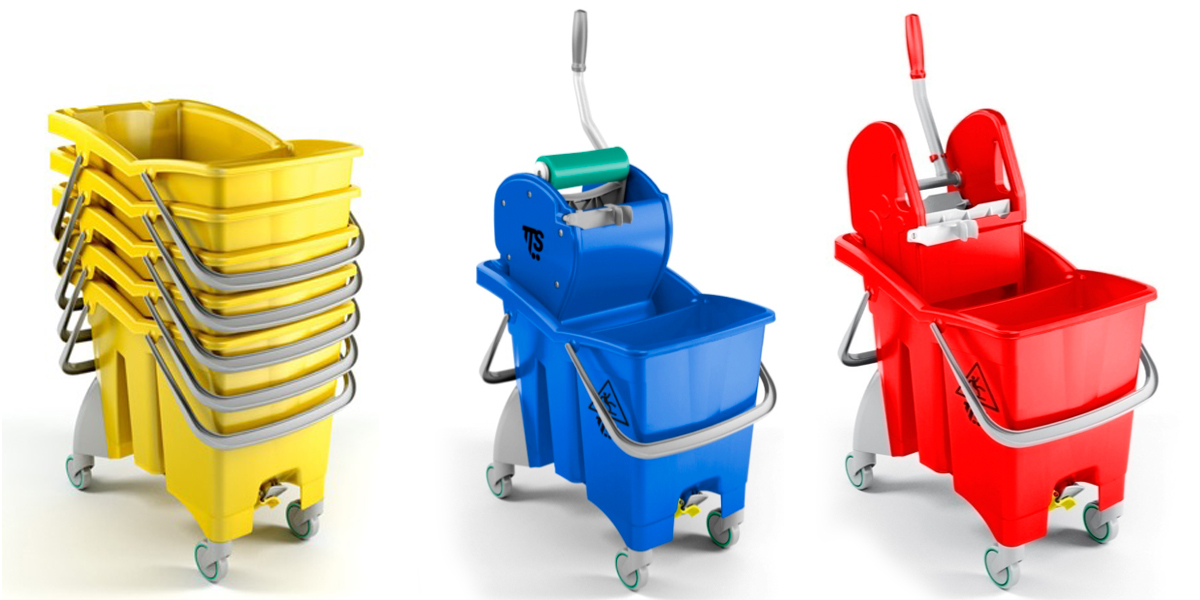 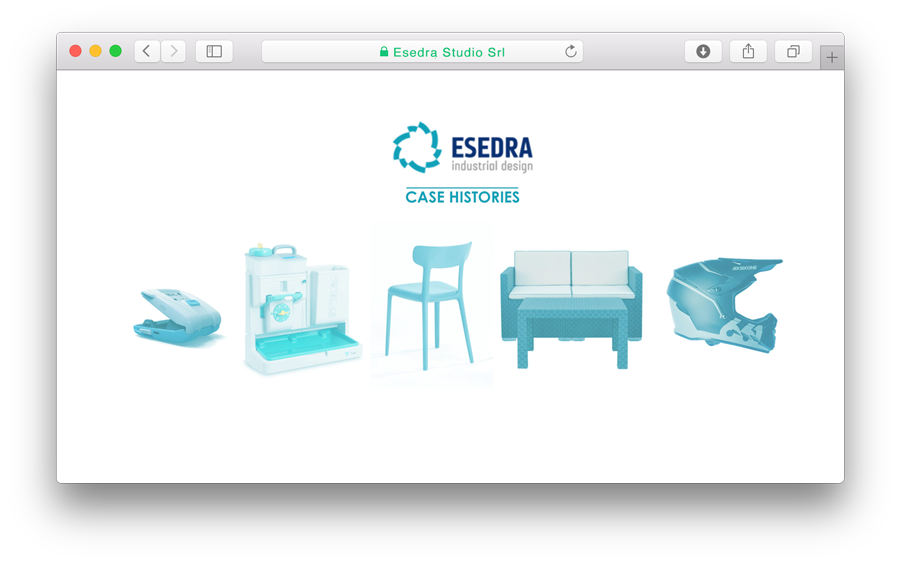